Kaiapoi's first dedicated dog park has been unleashed to the delight of local dog owners and their canine friends. 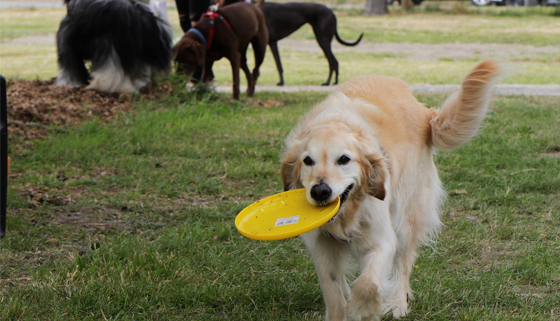 Having been built on previous red zone land, the dog park features many retained trees and shrubs that were once the pride of residents' private gardens. Coupled with park benches, it already has the feeling of an established park.

Barbara Townsend, a former resident of the land where the dog park is located, had the honour of cutting the ribbon alongside Mayor Dan Gordon.

A bit of friendly competition was held after the formalities, with dogs contending for the titles of scruffiest, “trickiest”, best-dressed and more.

Mayor Dan Gordon, one of the judges, said "It's great to see the dogs and their owners enjoying themselves; it's such a fun way to open the dog park".

The Waimakariri District now has four dog parks. One straddles both Pegasus and Woodend, and two are located in Rangiora.

There are three entrances to the Kaiapoi Dog Park; off Charles Street, Jollie Street, and also from the Honda Forest area.