Council housing for the elderly units

The Council has housing units available in Kaiapoi, Oxford, Rangiora and Woodend for the elderly with limited means who do not own a property, or whose assets are insufficient to purchase a suitable small property in our district.

The units are well maintained and include window coverings and carpet.

Small pets such as birds or cats are welcome at the units provided these do not cause a nuisance to other residents and ideally should be limited to one.

The newest units are Ranui Mews, between Williams and Hills Street in Kaiapoi. These units replaced the ones that were located on red-zoned land in Hilton Street and Raven Quay. They were officially opened on 12 June 2014. The rental for these units is slightly higher than the rentals of the older units in the district.

Other units were built in the 1960’s and 1970’s, most with the original layout and fit-out. Council is underway with a program of refurbishing these units over the coming decade to make them fit-for-purpose for another 40 to 50 years. Refurbished units generally have a mix of open plan living spaces, double glazed windows and doors, new kitchens and in some cases new bathrooms, plus and a range of other enhancements depending on the site.

These refurbished units once completed have a slightly higher rent than the un-refurbished units. As the program is ongoing the numbers shown in the following sections may vary slightly but will be updated on a periodic basis.

Housing for the elderly units in Kaiapoi

Situated between Williams Street and Hills Street, this complex has 21 single units and 4 queen units. There are carports available but no garages.

The Martyn Place units are at 23 Meadow Street. There are 4 single units, 8 refurbished and 9 studio units. There no garages or carports at this complex.

Housing for the elderly units in Rangiora

Durham Court is situated at 34 Durham Street. There are 2 single units and 2 queen units. There are no garages or carports at this complex.

Matthews Court is situated at 78 Durham Street. There are 14 single units and 4 queen units. There are no garages or carports at this complex.

Tyler Court is situated at 56 Durham Street. This complex has 4 studio units, 20 bedsit units, 4 queen units and a shared laundry. There are no garages or carports.

Housing for the elderly units in Oxford

The Meyer Place complex has 3 queen units, 1 refurbished unit and 9 single units. Ten of the units have carports.

Housing for the elderly units in Woodend

The complex at 29 Gladstone Road has 3 queen units with single garages. 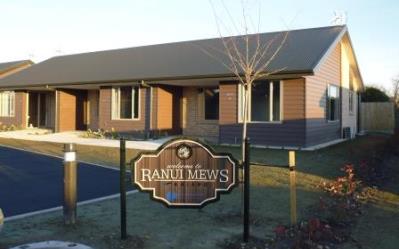