A Sister City relationship exists with the Enshi Autonomous Prefecture. 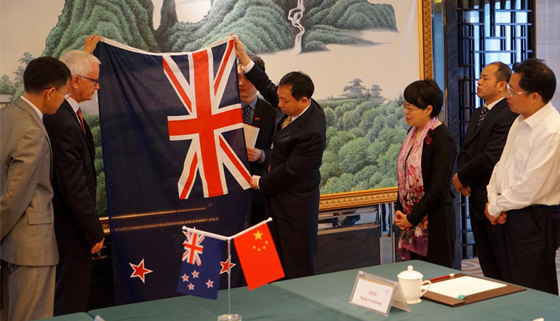 In April 2016 the Council authorised the Mayor to sign a Sister City relationship agreement with Enshi. The Agreement was a first for Waimakariri, and reflected Council’s willingness to co-operate and promote external relationships and exchanges.

The success of Council first visit to Enshi was relected in the fact that Enshi officials were certain that they wanted to sign a Sister City relationship agreement (rather than a Memorandum of Friendship and Co-operation) and wanted to extend the agreement to include all of the autonomous prefecture (two cities and six countries) with a population of 4 million rather than just with the Enshi City District that has a population of 780,000.

The Agreement does not commit the Council to anything other than extending its willingness to co-operate and promote the relationship and exchanges between the two districts.

The main benefit from the Enshi relationship is expected to be cultural, promoting an increased understanding of Chinese culture that will be strengthened further through school connections. Business connections have also been made and those leads will be explored further.

Given the huge growth in Chinese tourists to New Zealand in recent years, with direct flights available from China to Christchurch, the relationship provides opportunities to enhance our understanding of Chinese culture so that we can better cater for their needs.

It is likely that the Council will need to host delegations from Enshi, as well as periodically visit Enshi in a reciprocal manner.

Enshi Prefecture is located in the mountainous belt separating Hubei's Jianghan Plain from the Sichuan Basin.

There are karst phenomena in the region. The most famous of them is the Tenglong Cave near Lichuan. A 290 metre deep karst sinkhole, located near the village of Luoquanyan in Zuanen County, is described as possessing its own unique ecosystem.

Enshi is a county-level city in and the seat of Enshi Tujia and Miao Autonomous Prefecture, in western Hubei province, People's Republic of China.

The so called Enshi Grand Canyon is also a well-known scenic area.

The entire county-level city of Enshi has an area of 3,967 square kilometres and a population of 780,000.