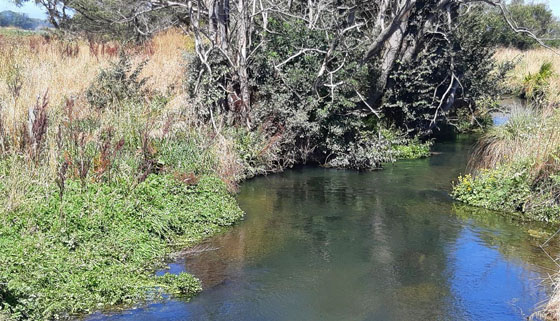 The Cam River and Catchment

The Cam River originates as spring-fed tributaries within and around Rangiora before joining the Kaiapoi River. Key tributaries are the North Brook, Middle Brook and South Brook. The river includes a variety of both common and rare native fish, including kanakana (lamprey), and wai koura (fresh water crayfish), as well as introduced fish. The catchment is an interesting mix of urban headwaters passing through rural communities to a tidal section in the lower reaches.

The Cam River and its catchment are highly significant areas for Ngāi Tāhu. There are many names in Te Reo Māori for the various reaches of the Cam River, including Ruataniwha. Within the Cam River catchment there is Tuahiwi (Maori Reserve 873), traditionally a mahinga kai outpost for the nearby Kaiapoi Pā.

The catchment has undergone deforestation, it now receives urban and rural drainage, and has been affected by significant urban and rural development. From the early 19th century until 2006 the Cam River carried wastewater from Rangiora. From 2006 onwards, an ocean outfall discharged the treated wastewater to sea via a series of pipes and purpose built wetlands, with the wastewater no longer flowing into the Cam River.

The Cam River has been identified by the Waimakariri Water Zone Committee as a high priority catchment for restoration work.

The Cam River Enhancement Fund was set up for ‘habitat restoration in the Cam River system’ on a July 2001 direction to Waimakariri District Council by the Environment Court.

It has been allocated to four priority areas; the heavily sedimented Tuahiwi Stream, North Brook and Middle Brook tributaries and spring protection in the headwaters of the South Brook.

The new 2001 discharge consent for the $35 million Eastern Districts Sewer Scheme, which removed Rangiora effluent from the Cam River system, contained a condition for rehabilitation of the river habitat and its tributaries.

The court decision required the council to set aside $25,000 for the following five years “for habitat restoration in the Cam River system…. as agreed between North Canterbury Fish and Game Council and the consent holder in consultation with the Department of Conservation.”

Initially the growing fund was allocated by Waimakariri District Council staff on a 50 per cent subsidy basis for fencing off livestock from the Cam system on application from landowners bordering the Cam River and its tributaries.

However, a wider scope with more public input was promoted by several Waimakariri councillors in 2007 after all Rangiora sewage effluent was removed from the river system with the 2006 commissioning of the Eastern Districts Sewer Scheme.

A Cam River Enhancement Fund subcommittee, which reports to the Council’s Utilities and Roading committee, was subsequently set up. The need for a strategic overview of how best to spend the fund to achieve the most improvement to the river system was immediately identified.

The Cam River Enhancement Sub-committee consists of members representing organisations with a shared interest and passion to rehabilitate the Cam River.

Environmental consultant Dr Henry Hudson was engaged to produce a draft Cam River Rehabilitation report in 2009. This identified sediment run-off as the major issue in the Cam and its tributaries.

Progress was halted by the Canterbury earthquakes and the subcommittee was not revived until late 2012-13. A revised and updated Scoping Strategy from Dr Hudson for the Cam rehabilitation was adopted by Waimakariri council in 2017 after the whole river system was re-examined. By that time the Cam River Enhancement Fund had grown to $212,000.

Work has involved design and costing for a series of sediment traps, drainage wetlands, bank stabilisation works, riparian planting and fencing setbacks. The first work under the scoping strategy by Dr. Hudson was carried out on the North Brook late in 2018. The majority of work, which will use the remainder of the Fund, is due for completion in 2019.