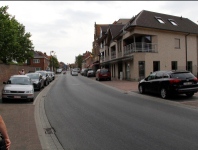 A twinning relationship exists between the Waimakariri District Council and the Municipality of Zonnebeke in the Belgian Province of West Flanders.

The Battle of Passchendaele was the scene of one of the bloodiest battles of the First World War, particularly the Battle of Ypres. During 100 days of 1917 there were 500,000 casualties. A large number of New Zealanders fought and lost their lives, especially on 12 October 1917 where 846 young New Zealanders were killed in the first four hours of the battle.

D Company from Rangiora and C Company from Kaiapoi were part of the Canterbury Regiment that fought in the area.  From preliminary research at least seven men from the district lost their lives there and, no doubt, there were others from the district who were also injured or lost their lives. The impact of the World Wars on this region of Belgium was very significant and remembering those events are of great importance to the people in this area. The area has the largest military cemetery in the Commonwealth with 12,000 war graves.

Following an invitation from the Burgemeester (Mayor) of Zonnebeke-Passchendaele in 2007, a twinning relationship was established between the two councils. The relationship is not as formal as a sister city relationship, which are developed under the Sister Cities International umbrella.

The formal signing of the twinning relationship was made on 5 October 2007 when the Mayor (Jim Gerard QSO) and Deputy Mayor (Jo Kane) visited Zonnebeke.

In April 2009 a delegation from Zonnebeke led by Mayor Dirk Cardoen, was hosted by the Council, the visit culminating with attendance at the Kaiapoi, Rangiora and Christchurch ANZAC Day services.

A visit was also made in 2009 by the Chair and Curator of the Memorial Museum Passchendaele 1917 (Belgium) to coincide with the travelling exhibition around New Zealand – 'Passchendaele: The Belgians Have Not Forgotten'.