For the first time in 18 months, all kerbside recycling from Waimakariri was accepted for processing at the central processing facility during October. 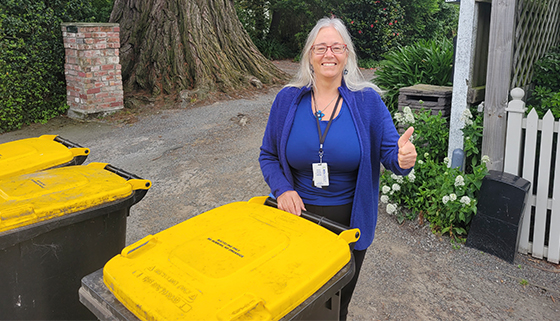 Eco Central process recycling for councils in Canterbury and rejects any loads that contain greater than 10 percent contamination. Contamination usually consists of unrecyclable items such as soft plastics, nappies and general rubbish. Last month was the first since April 2020 that all of the District’s kerbside recycling fell under that contamination threshold.

“This is a significant milestone for us,” says Council’s Solid Waste Asset Manager, Kitty Waghorn. “A huge thanks to our residents for doing the right thing with their recycling, and continuing to improve since leaving Alert Level 4 this year.”

“This is a huge improvement over the 7.2 percent average from August which included one rejected load,” says Kitty.

The results are all the more impressive because under COVID-19 alert levels 2, 3 and 4, bin checks aren’t able to be carried out. Kitty says the checks are a good way to remind people about what can be accepted in the kerbside bins for recycling.

“While the bin checks have proven to be effective, it seems that maintaining our consistent messaging over this period has helped us keep our contamination levels down.”

While the 10 percent contamination target has now been cracked, Waimakariri’s goal of consistently achieving under five percent recycling contamination is still to be met.

“It’s important that people to keep recycling correctly so those contamination rates don’t start to creep up again,” says Kitty.  “The last thing we want, is to see truckloads of recycling being sent to landfill.”

Kitty says that bin checks will start again once COVID-19 restrictions ease and she encourages residents to keep up the good work.