District-wide recycling bin checks resume from Monday 12 April, and this time gold stars will appear on bins where residents have got their recycling right. 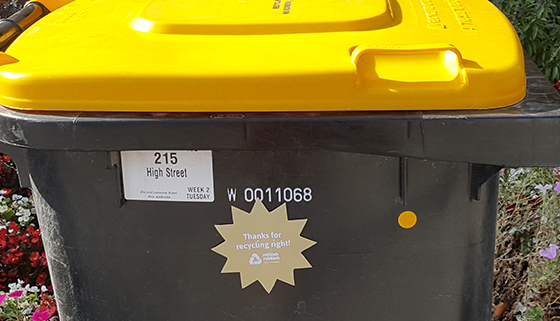 “During the first round of bin checks we found that people wanted us to let them know when they got things right. A gold star is a simple and low-cost way of acknowledging residents who are doing a great job”, says Kitty Waghorn, Council’s Solid Waste Asset Manager.

Educational material will be left in letterboxes of properties where bins are collectable but still have a few incorrect items.

Bins that are too contaminated with rubbish and incorrect items will be left uncollected, with a label on the handle explaining which items shouldn’t be in the recycling bin.

Recent figures show that 60% of recycling is going to the landfill, prompting the Council to continue the bin checks.

“Bin checks help us see which items are causing confusion, so we can do a better job of educating people. It also means we can remove contaminated bins from collection before they can ruin the whole truckload”, says Kitty.

As well as being wasteful, poor recycling hits ratepayers hard in the pocket. Kitty says that between October and December last year, extra landfill charges piled up to more than $149,000. Unfortunately this year’s figures aren’t looking any better with January and February’s extra costs sitting at $92,000.

“Incorrect recycling is costing ratepayers dearly, each additional truckload to the landfill costs more than $1,000.”

So far during bin checks, 1,723 bins have been found to be contaminated.  The most common issues are food, liquid cartons like Tetra-Pak, takeaway cups, soft plastics and dirty nappies.

The Council says that if people are in doubt, it’s best to throw it out. Find out more about recycling correctly at rethinkrubbish.co.nz