At their August meeting the Woodend-Sefton Community Board were delighted to hear that the redevelopment of Owen Stalker Park in Woodend is nearly completed.

Board Chair, Shona Powell is excited for the fences to come down and is looking forward to everyone seeing and experiencing the revamped playground. 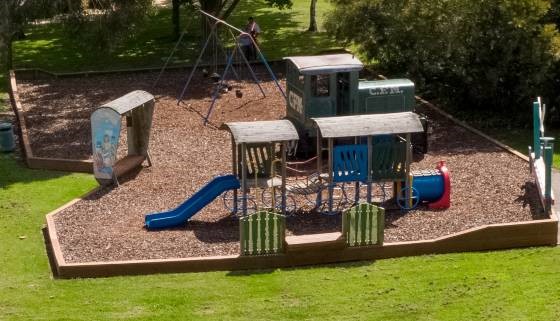 “The much-loved train has had a new lease of life and is very much the centre piece of the playground. And the train theme continues with a new platform and tracks.”

The redevelopment of the playground has been a collaborative effort between Council staff, Waimakariri Youth Council, Woodend School, the Waimakariri Access Group and the wider community. Their collective involvement has resulted in what will be a real focal point and gathering place for the community.

The fence around the BMX track will remain for a while to allow the ground conditions to improve and harden.

The Board were pleased to support hosting the Older Person’s Expo in Rangiora in October with $500 of funding. This is a multi-agency event that provides an opportunity for older people in the District to find out more about support and services they can access.

The Board approved street names for the next stage of the Ravenswood Development. The new streets are all named after early farmer settlers of the Woodend area and include:

The Board got a final look at the draft Cycle Network Plan for the District and were able to provide some more feedback as part of the last stages before it goes out for feedback from the public later this year.

The public are welcome to attend the next meeting of the Woodend-Sefton Community Board at 6pm, Monday 13 September 2021 in Woodend Community Centre unless advised otherwise.