Today marks the start of “Road Safety Week”, a chance to raise awareness and promote steps everyone can take to reduce the harm that happens on Waimakariri District’s roads. 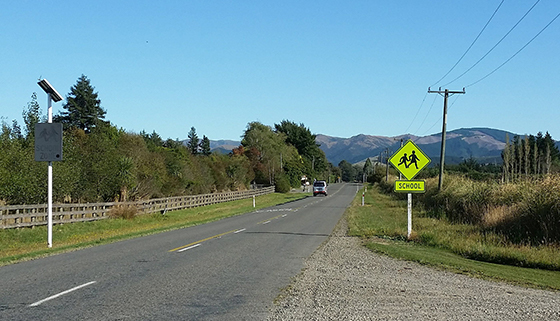 “Even more disappointing was parents using a cellphone while they had children in the car.”

“We know there’s a lot more crashes than those recorded where cellphone use has caused a distraction,” Colin says. “Each time someone uses their phone to call or text they’re not only putting their own safety at risk, but the safety of anyone in their vehicle and other people using the road.”

Over the last five years there have been thirteen crashes where drivers admitted they were distracted by cellphone use, with three of these crashes resulting in serious injuries.

Council’s Road Safety Co-ordinator Kathy Graham says Road Safety Week is an opportunity to be more mindful of the risks when out on the roads, especially past school gates during pick-up and drop-off.

“We often get feedback from schools concerned about speed past their school gates, particularly our rural schools. Most drivers know there’s a school there, but sometimes our “auto-pilot” switches on and our minds can be on other things when we’re driving.”

“Driving requires our full attention. It’s not something we do secondary to another task, and this week is a great time to rethink where our focus is when we’re driving.”

Over the last five years, there have been 186 crashes in the Waimakariri District where speed was a factor, resulting in one fatality, 19 serious injuries and over 60 minor injuries.

Driving to the conditions isn’t just in times of bad weather – it’s assessing the risks and making allowances for others. This is particularly relevant around schools where young children don’t have the same judgement of vehicle speed and can often be unpredictable.

Drivers are encouraged to check they are paying full attention to the areas they drive through, identify the risks, check that speed is appropriate to the conditions, put any distractions to one side and concentrate on driving.

We all have a part to play in making roads safer.