Recycling: The Good, The Bad and The Ugly

The Council are praising residents who cleaned up their recycling following a bin-checking campaign running over the last two months.

Almost 5,000 bins across the Waimakariri District have been checked in an effort to prevent recycling being sent to landfill.

Households who made mistakes were given educational material and rechecked in following weeks. Recycling contamination from these households dropped from 24% to 8% over the first five weeks.

“It’s really pleasing to see such a big improvement. We want to thank residents for taking a look at their recycling and correcting a few common mistakes,” said Solid and Hazardous Waste Portfolio holder Robbie Brine.

“We can see the education campaign has made a huge difference to our recycling bin contamination rates. We’re now sending less to the landfill because people are doing the right thing.”

While the improvement is good news for spot-checked areas, Robbie had some disappointing figures for the rest of the kerbside collection area: 62% of recycling is being rejected at the sorting facility and going to landfill.

Changes to the types of plastics that can be recycled came into effect in May, causing some confusion about what to put in the yellow bin. However, common items found under the lid during bin-checks went well beyond incorrect plastic types.

“Across the rest of the District we’ve got work to do to clean our recycling up. People either need to brush up on what can be accepted for recycling, or are simply using their yellow bin as an extra rubbish bin, which is what we’re seeing from some households”, he said.

“The rejected bins had items that obviously had no place in the recycling, things like old meat, sanitary items, cigarettes, a potty, a broken 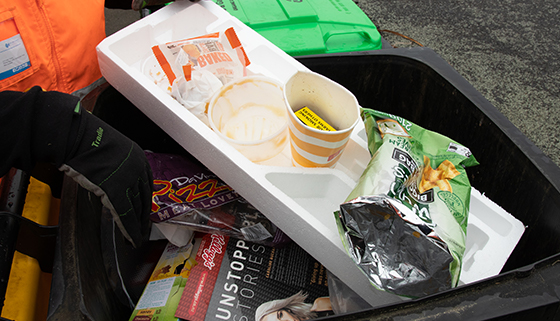 dart board, dirty nappies and other general rubbish,” said Robbie.

These will be the households the Council will continue to focus on with an education before enforcement approach.

However, after three strikes recycling bins that continue to contain rubbish will be removed.

Recycling bins are for:

Items should be clean, not squashed and all lids and tops should be put in the rubbish.