Each year, the Waimakariri District Council celebrates the people who have made great contributions to the Waimakariri District. Now in their 29th year, the Community Service Awards formally recognise the substantial commitment of the unsung heroes who work quietly in the background making our community a better place to live. Whether it’s for sport, youth, family, church, education, community or earthquake response, we want to make sure these volunteers are thanked on behalf of our community. 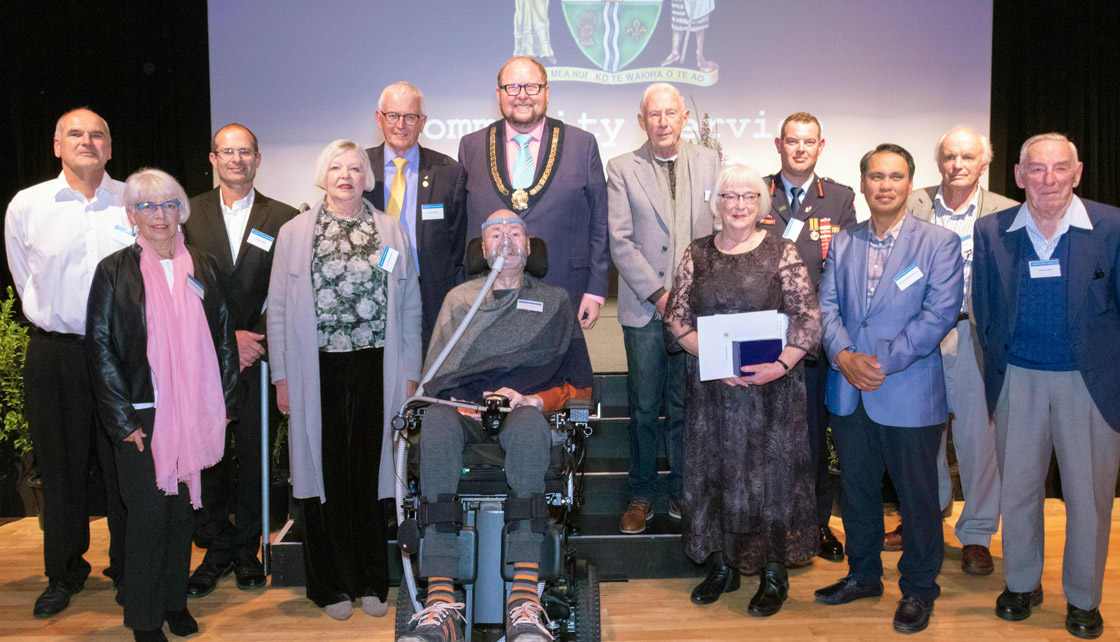 "There are a lot of people doing tremendous voluntary work in the Waimakariri District,” says Mayor Dan Gordon.

“Many fly under the radar without recognition, however, we would like to acknowledge these very humble people for their considerable contributions. It is the least we can do, on behalf of a grateful Community, to say thanks to people who go the extra mile to give outstanding service."

This year, a new Mayor’s Award for exceptional community service was introduced.

Three people received the Mayor’s Award, with a further 10 people receiving the Community Service Award at the recent ceremony in the Rangiora Town Hall.

The Mayor’s Award recipients for 2020 are:

David Ayers - David has been immersed in local government for 36 years after being first elected to the Rangiora Borough Council in 1983. He was Deputy Mayor of Waimakariri District from 1995 until 2001 and then elected Mayor in 2010, ultimately serving for three terms. At the time, he was also a Civil Defence Controller and following the September 2010 earthquake he was in charge of the Emergency Operations Centre in the evenings. David’s deep commitment to the community meant he often worked seven days a week to provide accurate information and confidence in the way forward. His strong, inclusive leadership of the District’s recovery focused on people and put the community first, making Waimakariri stronger than ever before.

Gary Boot – Gary has provided 18 years of exceptional service to the Waimakariri District Council and the community. In 2002 he joined the Council as Utilities Manager and was responsible for overseeing the maintenance and development of water and wastewater systems for the District. Following the September 2010 Earthquake, he assumed the role of Project Delivery Manager for the Earthquake Infrastructure Recovery Steering Group. His lead of the immediate on-the-ground response was crucial to quickly restoring services to around 3,000 affected properties and his work is still highly respected within the organisation, throughout the District and nationwide. His dedication continued during the longer-term recovery from the earthquakes, as he worked with multiple agencies on demanding issues to achieve an outstanding outcome for the community.

Brian Hoult – Brian’s commitment to promoting and supporting the arts in the Waimakariri District has spanned three decades. Since 1988, he has served on the Community Arts Council, first as treasurer and then as Chair, only recently stepping down. The Arts Council supports a wide range of local creative arts including musical recitals, art exhibitions and creative writing. Brian was instrumental in establishing the Waimakariri Art Collection Trust in 1995 which currently owns 70 items of significance to the District including painting, pottery and sculpture. He brought together a group of like-minded locals in 1997 to stage the first exhibition at what was to become the Chamber Gallery. Over the following 23 years, the gallery has hosted a further 230 exhibitions under Brian’s stewardship.

The Community Service Award recipients for 2020 are:

Marilyn Ayers – In addition to a demanding nine years as Mayoress, Marilyn has a long history of community service, including patrolling for Community Watch, fundraising for Dudley Pool and managing a “flu clinic” at Southbrook Park in response to Swine Flu. Her abilities as a historian, have made her ongoing volunteering with the Rangiora and Districts’ Early Records Society invaluable. Along with husband David, she has played a significant role in the Methodist church community for many years. Marilyn continues to serve through her membership with Rotary, for which she is nominated as incoming President.

Bob Balanos - Since arriving from the Philippines with his family in 2006, Bob has devoted himself tirelessly to ensuring that migrants have a positive life in the Waimakariri District. He’s worked with organisations such as Dairy NZ to help create positive working relationships between migrants and Kiwi employers and bridge the cultural divide. Bob has been involved with numerous initiatives to welcome, inform, connect and empower migrants and was instrumental in the establishment and development of the Waimakariri Migrants’ and Newcomers’ Group.

Liz Duke – Liz has been an avid supporter, coach, head coach and committee member of North Canterbury Riding for the Disabled for 12 years. During this time she has been instrumental in teaching and developing a strong team of passionate volunteers. She has made significant contributions to participants’ wellbeing, the riding programme, goal setting and overall operations of the organisation. Liz’s involvement now extends to working with the organisation’s national office in a variety of roles.

Clay Griffin – Clay is owner-operator of Hydro Response, a company specialising in flood protection. After moving to Rangiora in 2001, he voluntarily helped protect residential properties in flood events by erecting barriers and diverting water. Since then, Clay has assisted the Council’s Civil Defence team in almost every significant flood event in our District where improvised flood protection has been required. He has regularly provided his expertise and equipment for Civil Defence and community training sessions while declining compensation.

Judith Hoult - Judith has a long and extensive involvement in our community - often working quietly behind the scenes with significant impact. From helping with community grant funding applications to delivering flyers to neighbourhood mailboxes to ensure her neighbours were supported during the Covid-19 lockdown, she has dedicated herself to whatever she deemed most important for the Waimakariri community. Judith has been a strong support of the arts and heritage buildings as well as contributing to many committees and boards including three terms with the Rangiora-Ashley Community Board, including serving as Chair.

Nick Ledgard - Nick has spent over 20 years caring for birds on our braided rivers. He is long-time chair of the Ashley−Rakahuri Rivercare Group, which conducts surveys and river management work to protect key indigenous riverbed birds, such as the endangered wrybill and black-billed gull, which breed in the lower reaches of the river. Nick enthusiastically shares his extensive knowledge through articles and talks with schools, service groups, Councils, public gatherings and on local radio. He’s also an expert in trees and actively involved in efforts to control the spread of wilding pines.

Tim Reynolds - Tim established the Kaiapoi Civil Defence Rescue Team in 1995 and his persistence saw the Rescue Team achieve registration as a national resource – NZRT, the precursor to NZRT-12 before he left in 2011. He joined the Kaiapoi Volunteer Fire Brigade in 2000 and has since deployed to countless emergencies including wildfires, earthquakes and cyclones, both nationally and abroad. He’s served as Kaiapoi’s Chief Fire Officer since 2015 and now has the additional duty as Deputy Principal Fire Officer for North Canterbury and Christchurch-Selwyn rural areas.

Glenn Scott - Glenn has been a dedicated volunteer at the Northern Bulldogs’ Rugby League Club for many years, in which time he has served as President, Committee Member, player and coach. Along with countless hours running the clubrooms and maintaining the playing fields to a pristine standard, he has worked closely to with local businesses to build a group of dedicated sponsors to support the Bulldogs’ Club. The uninsured clubrooms were completely destroyed in the Canterbury earthquakes and Glenn’s dedication, hard work and sponsorship was instrumental to their successful rebuild.

Armin Svoboda - For over 35 years Armin has been a member of the Cure Boating Club. He initially rowed competitively for the Club before turning his focus to coaching in a voluntary capacity. He has since coached over 1,000 young people, many of whom achieved national status including one who represented New Zealand at the 2016 Olympic Games. In addition to his thousands of hours of coaching, he also helps the Club with repairs, maintenance, boat building and administration tasks all while operating a successful dental practise.

John Ward - Since its inception in 1975, John has served as a member of the Rangiora New Life Fellowship Trust which constructed and oversees Gateway New Life Church and Rangiora New Life School. During the early 1970s, John provided technical support for the establishment of a small Christian radio station in Christchurch, which grew into Radio Rhema. For over 20 years, John and his wife Dorothy provided monthly church services at the Kia Marama special treatment unit at Rolleston Prison and from 2000 to 2019, they also volunteered to help conduct church services at rest homes.