Community Board to Voice Opposition Against Quarry Proposal

The Rangiora-Ashley Community Board will be voicing their opposition to Taggart Earthmoving Ltd’s proposed quarry at the Rangiora Racecourse following a unanimous vote at last weeks’ meeting. 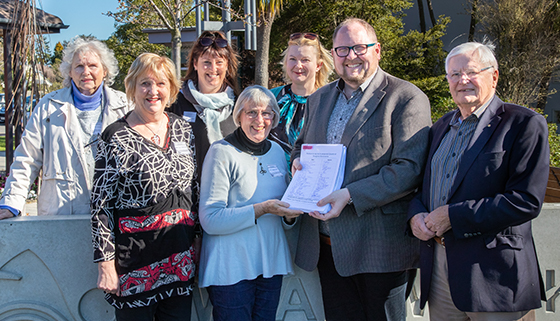 “The Board are 100 percent behind the community’s views on this proposal,” said Community Board Chair, Jim Gerard.

“We’re disappointed that both the Rangiora Racecourse and Taggart Earthmoving think that the middle of the racecourse so close to residential homes is an appropriate location for this activity.”

The company proposes a quarrying operation at 181 Lehmans Road, and in October, the Council formally received a petition with over 5,000 signatures opposing Taggart’s plans to excavate gravel at the site.

The Board are awaiting notification of the Resource Consent, which is expected in the coming weeks.

In other agenda items, the Board approved a recommendation to remove a shared path for walkers and cyclists as part of improvements planned for Flaxton Road, and replace it with a footpath. This follows several issues being highlighted during a recent safety audit.

Jim Gerard said two options were presented following the audit, including removal of all on-street parking along Flaxton Road to improve visibility, or downgrade the shared path to a footpath.

Staff will be meeting one-to-one with local businesses to let them know of the design changes, and feedback will be incorporated into the final design.

In final business, the Board considered several Discretionary Grants Funds.

The next meeting of the Rangiora-Ashley Community Board will be held from 7pm on Wednesday 11 November in the Function Room at the Rangiora Town Hall. All are welcome.