Rangiora-Ashley Community Board members were updated about plans to improve Flaxton Road between Lineside Road and Kingsford Smith Drive at their meeting last week. 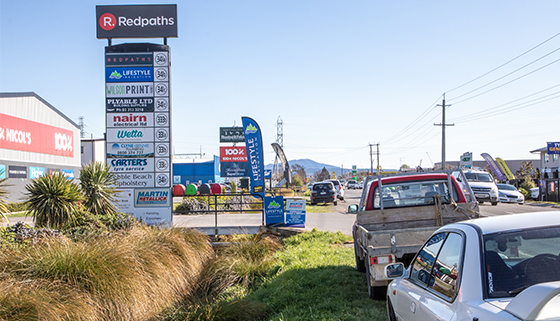 A shared path for walkers and cyclists is planned along the drain on the western side of the road. While staff were finalising the design, an investigation into the long-term stability of the drain banks showed that the current proposal creates an increased risk of the path collapsing or slumping into the drain.

If the path were to remain on the western side, a large length of the drain bank would need substantial earthworks, adding significant costs to the project. There would also be no assurance that the work would resolve future issues with the stability of the bank.

Staff are now talking to businesses about a proposal to move the path to the eastern side of the road and to discuss detailed options to make it safer for the shared path to cross in front of entrances.

Board Chair, Jim Gerard, says the Board are supportive of the proposal, which significantly reduces risks and costs associated with extensive earthworks, while still maintaining an off-road facility for walkers and cyclists through a busy commercial area.

“We see the benefits in relocating the path and support the staff recommendation to put the proposal in front of local businesses. We look forward to working with them and hearing their feedback, which will go to Council on 6 October for a final recommendation.”

The proposed route would travel along the eastern side of Flaxton Road from Lineside Road until it reaches the Southbrook Resource Recovery Park. A road crossing and footpath would then connect people to Kingsford Smith Drive on the western side of the road.

In other matters, the Board moved on to approve a Discretionary Grant Application from North Canterbury Indoor Bowls, who received $500 towards the cost of hiring the Southbrook School hall for the Indoor Bowls Tournament for 2020.

Over 150 people are expected to be involved in the tournament with participants from clubs from Kaiapoi to Balcairn attending.

The next Rangiora-Ashley Community Board Meeting will be held at 7pm, Wednesday 14 October in the Function Room at the Rangiora Town Hall.