The work is part of the final stages of the Christchurch Northern Corridor (CNC) motorway project. 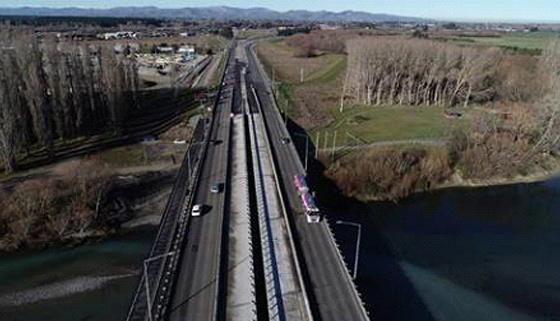 As a result of this work, for the first month to late September the Tram Road on-ramp will be closed between 5.30am and 9.30am on working days, says Colin MacKay, Waka Kotahi Portfolio Delivery Manager.

While the Christchurch Northern Corridor (CNC) Alliance team are resurfacing the existing south and later the northbound lanes on the bridge, traffic will move over to the newly asphalted middle lanes, says Mr MacKay.

“Resurfacing work will start on the existing southbound lanes, affecting the morning flows, followed by the northbound lanes. Depending on the amount of preparation work on the old deck and favourable weather conditions, we expect each side to take around four weeks to complete,” he says.

“Once the bridge lanes are complete, the surfacing crews will move to the SH1 lanes north and south of the Waimakariri Bridge. The resurfacing work will be complete before opening of the new Christchurch Northern Corridor motorway including the new carpool lane from Tram Road in December.”

There will be significant delays for road users during morning peak while the work on the southbound lanes is underway from Monday 31 August to late September.

“With traffic moving over to the middle of the bridge and merging back, movements will be much slower than usual. Especially during the morning peak, Tram Road users should also expect delays at the Tram Road and Main North Road intersection as we will be using Stop/Go controls,” says Mr MacKay.

Traffic on SH1 will also be slow just north of and over the bridge where traffic is merging and the CNC team asks all drivers to please build in extra time and anticipate a longer journey.

“We would advise people to travel outside peak hours in September if they are able to do so or leave earlier than they normally would,” says Mr MacKay.

“Within the four weeks of working on the southbound bridge lanes we will need to do quite a lot of work to first inspect the bridge decks, to repair and strengthen several bridge joints and structural work to the abutment before we can apply a good new surface.”

“We have also informed the heavy haulage industry in the area that while traffic is on the middle bridge lanes, the inner bridge lanes will not allow for some over-dimension vehicles and loads,” says Mr MacKay.