From this weekend, the Christchurch Northern Corridor team will be installing gantries on SH1 around and near the Waimakariri Bridge, north of Christchurch. This will involve lane and full road closures at night, says Waka Kotahi NZ Transport Agency, through to October.

A gantry is a steel overhead support structure to hold traffic signs. 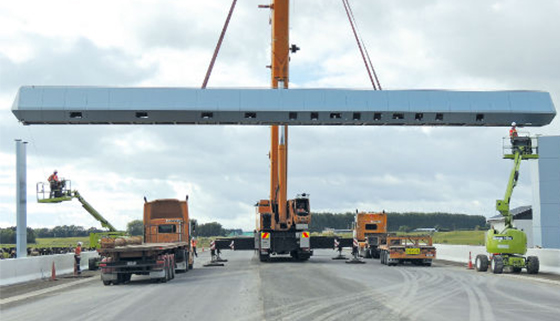 In total on SH1 seven gantries will be installed. Two on the north side of the Waimakariri Bridge and five south of the bridge. Poles will be installed on the east and west sides of SH1 first, and then the gantry is placed on top.

A gantry is a steel overhead support structure which will hold traffic signs.

“To install the gantries safely, we need to reduce traffic lanes or close both lanes in one direction for several nights. For one full night, we will need to close all motorway lanes in both directions,” says Colin MacKay, Waka Kotahi Portfolio Delivery Manager.

There will be well signposted detours in place during any overnight closures. You can view the timetable of closures here.

The lane closures or diversions will be in place from 10pm till 5am the next day, over 18 nights (see timetable below). With lane reductions, lane closures and traffic diverted, traffic movements will be slower than usual, so please expect delays, says Mr MacKay.

“We first install poles on both sides of SH1 and then position the gantry on top. To do this safely, both southbound lanes going towards Christchurch will be closed at night on Sunday 6 September, Monday 7 September and Tuesday 8 September. Southbound traffic will be diverted via the old Main North Road Bridge over the Waimakariri River,” says Mr MacKay.

One night with traffic diverted both directions

For one night, Wednesday 30 September, when the largest gantry is being installed, all motorway traffic, in both directions, will be diverted.

“The work is weather dependent and we hope to have it all completed well in time for the motorway opening just before Christmas,” says Mr MacKay. “Please reduce your speed in this area during all the work. We thank everyone for their cooperation and for being patient around our work sites and people to date.”

You can find out more about the various traffic changes and diversions coming up over the next month here.

With lane reductions, lane closures and traffic diverted, movements will be slow. Please plan your journey and expect delays at night. When traffic is reduced to one lane, a 60km/h speed limit will be in place.

Sign up for project updates about the Christchurch Northern Corridor.