The Mandeville Foot Bridge will remain closed for a while longer so further repairs can be made following the discovery of timber rot in a second structural tower." />

The Mandeville Foot Bridge will remain closed for a while longer so further repairs can be made following the discovery of timber rot in a second structural tower.

Since January, contractors have been busy repairing the bridge, after rot was found in one of the structural tower posts during a routine 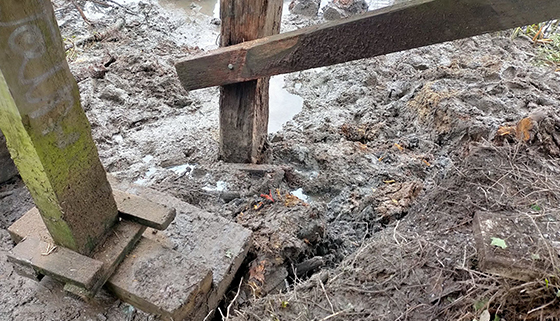 check in December 2019. That tower has been replaced.

However while using a water blaster, a second bridge pile on the northern embankment was found to be in poor condition.

A thick steel sleeve has been designed to cover the damaged portion of the bridge pile, which will be installed this week during the low tide.

Rot has also been found in three sections of deck beams, as well as in a second tower directly above the damaged bridge pile, also at the northern embankment. Hardwood timber has been sourced, and this repair will follow on once the steel sleeve has been fitted to the bridge pile.

“We understand the community are eager to have the bridge back open and we’re working as quickly as we can to make that happen.”

Contractors aim to complete structural and minor maintenance works as soon as possible to allow for the bridge to re-open in early September.

It will need to close again in summer for programmed re-painting work. The Council will provide an update when timing has been confirmed.

You can read our previous update here.