Kaiapoi Park and Ride Gets Go Ahead

A new Park and Ride site for central Kaiapoi is one step closer to being confirmed following the Kaiapoi-Tuahiwi Community Board meeting this week.

The Board considered three possible locations before settling on Council-owned land next to New World.  The new Park and Ride facility will be connected to additional parking already planned for the area under the Kaiapoi East Carpark project.

The new combined car park will provide 100 car parks, with 40 provided specifically for Park and Ride. The preliminary design proposes entrances from both Charles and Sewell Streets and is estimated to cost just under $300,000.

It’s hoped that the Park and Ride facility will complement new peak hour bus services and make accessing the Christchurch CBD easier for residents and commuters.

Board Chair, Chris Greengrass, says the car park will also benefit businesses in the area.

“We think this will make it much easier for people to find a park on the north side of the river, it will help make public transport a more attractive option and it’s large enough to provide for future Town Centre growth.” 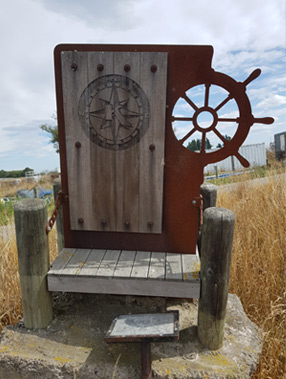 The return of public artwork to the Kaiapoi Riverbanks was discussed by the Board as Council staff presented engineering estimates for the construction of new foundations for the four large sculptural pieces.  Board members were concerned by the expense and asked Council staff to look at installing the artwork on flat areas adjacent to the river rather than on top of the stop bank in order to save money on foundations.

Board Member, Jackie Watson, was a key part of the original community-driven project that commissioned the artwork in 2006/2007 and was nominated to work with Council Green Space staff to find suitable locations for re-installation. The four artworks are two Obelisks, Trousselot Memorial and Ships Crane. They were removed from the stop banks following damage caused by the Canterbury Earthquakes.

The Board also approved a proposal from the Waimakariri Sailing Club to install a commemorative memorial to their original club on the northern bank of the Kaiapoi River.

The memorial will be 1.6 metres high with a stainless steel yacht sitting upon a concrete plinth, and will add historical interest to the Kaiapoi Marine Precinct area.

Finally the Board approved a discretionary grant of $420 to the Kaiapoi Community Garden to assist them with the costs of celebrating their 10 year anniversary.