Keen BMX riders, both young and old, lined up over the weekend to try out Kaiapoi’s new community BMX track. The opening of the track had been highly anticipated, and there was an impressive turnout of bikes and people.

Councillor Al Blackie, the former Chair of the Regeneration Steering group, kicked off the ceremony by acknowledging the generous donation of soil by local business SOL Quarries, “Their contribution made the funding go a lot further”.

Several champions rode for the former club, including Olympian Trent Jones whose company Trent Tracks, was tasked with building the new track.

Aaron Clarke, the current President of the North Canterbury BMX club interviewed Trent during the opening and asked him what he had in mind when he designed the track.

“My first thought was ‘fun’, it has to be fun. My second aim was to make it safe and lastly I wanted to design a track which caters to all levels of skill,” said Trent. 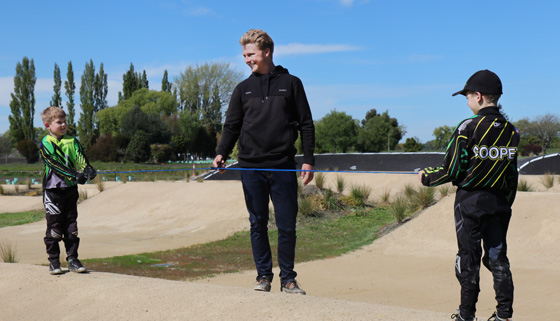 The track which cost close to $200,000, is surfaced with lime chip and dust, and coated with a polymer glue for stabilisation.

Trent, along with two young BMX riders, Pearse and Patton Cooper had the honour of cutting the ribbon to open the track. The boys were pleased when they got to keep the ribbon as a souvenir.

After a demonstration lap by Trent and some trick riding displays by the North Canterbury BMX club, the track was open for all to enjoy. Judging by the smiles seen on rider’s faces, the track is proving to be a great ride for people of all ages and ability.