Kaiapoi River will soon be bustling with boats, as the Kaiapoi-Tuahiwi Community Board approved a Marine Precinct Management Plan that will allow for the allocation of new casual and long-term berths. 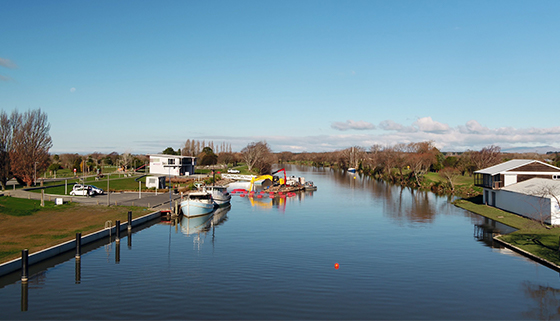 The river was dredged over winter to allow for the installation of the final set of pontoons and the Marine Precinct is expected to be fully operational by late September. Members of the public will be asked to register their interest before the majority of the long-term berths are assigned by random draw.

The River Queen has been allocated a 25m berth. The vessel formally operated tourism cruises in Blenheim, and will now operate dining cruises up and down the Kaiapoi River. The two existing vessels currently berthed at the wharf will also be offered licenses to remain.

More information about the berths and the Marine Precinct management will be made public by the Waimakariri District Council in the coming weeks.

In other business, an initiative by 11-year old Harper Robinson has resulted in the Council agreeing to install combined rugby/soccer posts in the Pines Oval.

Harper lives in The Pines Beach and made a presentation to the Community Board at their June meeting to request some goal posts.  As a keen rugby player, he and his friends had nowhere locally to practice their goal kicking and often had to travel to Kaiapoi to train.

Council staff met with Harper and his mother at Pines Oval and identified a good location for the new posts. Board Chair Jackie Watson, said it was wonderful for the young people who live in the area.

“We were impressed with Harper’s courage in making his request to the Community Board, and we were pleased to support him.  We hope these new posts will provide Harper, his friends and the local youth a lot of enjoyment.”

The new posts are suitable for both rugby and soccer and will be in place shortly.  The total cost of purchase and installation is $2,700, and will be covered by the Community Board’s general landscaping budget.

The Board also approved a concept plan for the revamp of the Kairaki Reserve. A draft plan had been presented to the local community earlier in the year and staff had incorporated feedback from the public where possible, including the addition of an extra rubbish bin and providing a tap for dog drinking water. The project includes construction of a new playground and toilet block.

A discretionary grant of $300 was awarded to the Reflection Community Trust for the cost of running the Natural Magic Pirates Show during their annual Light Party.  The event provides an alternative to Halloween and ‘trick or treating’ and is hosted in Wylie Park, Kaiapoi, attracting over 5000 people in previous years.

$300 was also awarded to the Pegasus Bay School PTA for their Pegasus Bay Art Show. The art show is described as a high quality and well run exhibition that brings visitors and artists from the wider Canterbury area to Pegasus. It involves students from the school and raises funds for the School’s art programme.

The Kaiapoi-Tuahiwi Community Board will next meet on Monday 16 September at Ruataniwha Kaiapoi Civic Centre from 4pm.  All are welcome to attend.