Kerbside collection contractors, Waste Management, are busy delivering rubbish and organics bins to those who opted into the new expanded service.

Kitty Waghorn, the Council’s Solid Waste Asset Manager, says the deliveries are going well and Waste Management are confident that all bins will be delivered before the service starts on 1 July.

“The teams are doing well and we know that people are really keen to get their bins as soon as possible. There may be the odd occasion where the delivery team can’t supply the full suite of bins to a property, but they’ll leave a note in the letterbox letting people know when they’ll be coming back” says Kitty.

Those receiving bins will see that they are taped closed stating ‘Please don’t use me until 1 July’, however the teams delivering the bins have noticed some have already been filled and presented at kerbside for collection.

“It’s great to see people on board with the new system, but unfortunately with the service not starting until 1 July, we won’t be collecting any organics or rubbish bins before then.” says Kitty.

Kitty said that thousands of bins need to be delivered and crews will still be delivering until late June, having started in mid-April. 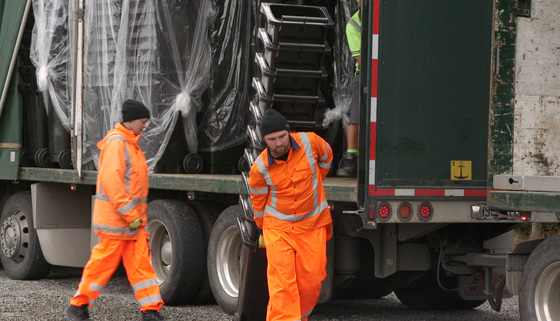 Kitty says that residents who ordered bins before 1 March and didn’t receive bins at the same time as their neighbours should contact the Council to arrange delivery.

Bins have already been delivered to Oxford, Sefton, Waikuku and Waikuku Beach; the delivery team is currently operating in Pegasus and Woodend

Updates on the Council’s Facebook page will let people know when deliveries will be done in their area, however Kitty says it’s tricky to pinpoint the exact timing.

“It’s quite a complex operation due to the wide choice of bins that people have selected, so the contractors won’t know exactly how long each area will take. We’ll certainly do our best to let people know when to expect the bins in their areas.”

Residents are urged to check the address label on the side of the bin before taking them in, so that they don’t take their neighbours bins in error. Organics and rubbish bins have already been tagged with a Radio Frequency Identification Tag, so there is no need to leave them out once they have been delivered.