Local residents and the Council were left dismayed by extensive damage caused to the Ashley Rakahuri Estuary after a vehicle drove into the protected area, became stuck and sent for reinforcements. 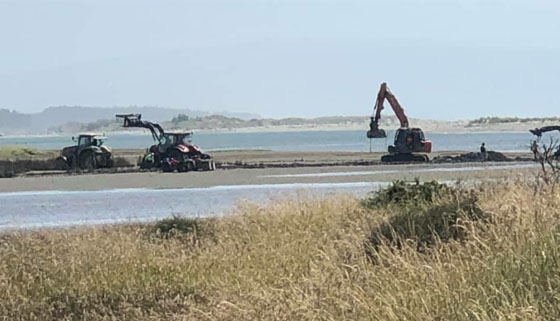 The subsequent rescue mission involved numerous unauthorised heavy vehicles, including three tractors and a digger, churning their way through the Estuary. Their attempts to salvage the vehicle were ultimately unsuccessful and the use of heavy machinery only multiplied the extent of the damage. The stranded vehicle was eventually removed by Environment Canterbury (ECan).

The Estuary is home to many endangered and rare species of birdlife, and under the Northern Pegasus Bay Bylaw 2016, access to the Estuary is prohibited to vehicles, dogs, horses and a range of other activities. Signs in the area clearly identify the rules of use.

Following the incident, the Council is reminding the public to respect the measures in place and to help protect this sensitive coastal area.

The Northern Pegasus Bay Bylaw was developed in partnership with the community and aims to protect the District’s beaches and estuary while ensuring all users can enjoy the area safely.

ECan rangers are responsible for monitoring and enforcing the Bylaw, they conduct regular patrols and breaches are taken seriously. The incident is currently under investigation by ECan.