Mayor Ayers presented Michael Petterson with a Community Service Award at our Council meeting on Tuesday 5 February 2019.  This award was in recognition of his role in establishing the Twining Relationship that Waimakariri has with the Zonnebeke Municipality in Belgium.

Michael was appointed as Honorary Consul for Belgium in Christchurch, serving in this role for nine years.  In recognition of this service, the Belgium Government made him an Officer of the Order of Léopold in 2007. 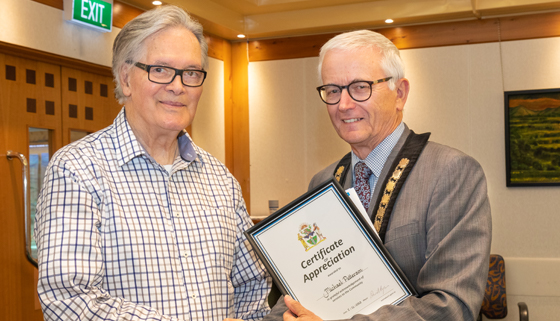 Michael was instrumental in forming the twinning relationship with Zonnebeke, he choose Waimakariri District because of its similarities with the Flanders area.   He was a foundation member of the Waimakariri Passchendaele Trust from 2009 until retirement.  Michael says that he is delighted with the relationship formed between the two Councils and is impressed with the constructive and meaningful interactions between the two authorities.

Michael attended the ninetieth anniversary commemorations of the Battle of Passchendaele in 2007 and had the honour of being present at the signing of the “Twinning” document by the respective Mayors of the Zonnebeke and Waimakariri Districts.

The relationship has grown with visits and special recognitions, such as the granting of free admission for Waimakariri residents to the Passchendaele Museum in Zonnebeke and the naming of the Passchendaele Memorial Path between Kaiapoi and Rangiora.

The last four years, with the various World War I centenaries, has been especially significant for the relationship, culminating in the centennial of the Battle of Passchendaele in 2017.

For his dedicated and loyal services to the twinning relationship between the Waimakariri District and Zonnebeke Municipality Michael is well deserving of this community service award.