Following the Rangiora-Ashley Community Board meeting last night, the future of trees located in land leased by Riding for the Disabled (RDA) was decided. 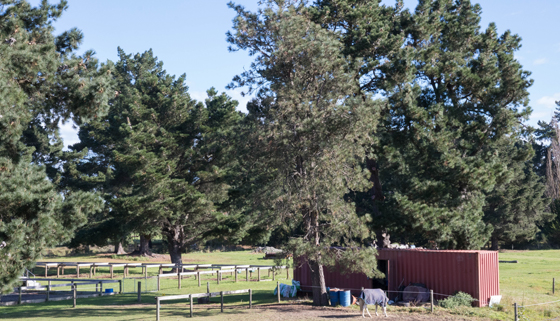 Three Monterey Pine trees in close proximity to a frequently used storage container were recently highlighted as a safety risk by the Chair of Riding for the Disabled. Concerns were also raised about pine needles falling onto the roof blocking stormwater runoff, potentially causing rust to the container in the future.

Staff from Council’s Greenspace Team met with the Chair of RDA prior to the Board meeting and various options were discussed.

Following an update from staff, the Board moved that the tree on the north east side of the container should remain, and two be removed from the north west side. Board Chair Jim Gerard says “While Council endeavors to retain healthy trees, we could see some issues with one particular tree which is now earmarked for removal. The Board felt that the outcome was a good compromise for all.”

The cost of the tree removal, including stumps, will be covered in full by RDA.

Following that discussion, a $500 grant was approved from the Boards Discretionary Fund to Waimakariri Arts Trust – Kaiapoi Art Expo, which will go towards the running costs of the Kaiapoi Art Expo and Schools’ Art Expo.

Environment Canterbury attended the meeting and provided members with an update on flood protection work near the stop banks of the Ashley River.

The project relates to the construction of secondary stopbanks built in the area known as “Breakbank’ on the south side of the river near the Ashley Bridge and rail bridge. The proposed work includes raising Millton Avenue to the height of the secondary stop banks which is a change of around three metres. Drivers coming from Rangiora may notice a small rise as the stop bank is approached, followed by a gentle gradient down towards the bridge. Cones Road will be raised by approximately one and a half metres.

Board members were advised that the work will generate temporary road closures and detours while it is underway, but will be carried out with the least amount of disruption as possible. Work is expected to begin in July and be completed by the end of November.

Board members representation at various ANZAC services across the District was approved, and wreaths will be laid.

Mayor David Ayers attended the later part of the meeting to provide an update about issues causing some concern at skate parks in the District. Mayor Ayers is currently in discussions with Police.

Finally, the Council’s Community Development Advisor, Madeleine Burdon updated the Board about a pilot survey conducted with residents of the Kippenberger Estate in 2017. The survey aimed to find out from residents whether they felt connected to each other and the wider township. While not a new concept, it was a new way to engage with residents in the Waimakariri District. The Board felt it worked very well and were supportive of similar engagements across the District in the future.

The next Rangiora-Ashley Community Board meeting will be held at 7pm on Wednesday 16 May in Council Chambers, 215 High Street, Rangiora. The public are welcome to attend.