How was the Strategy developed? 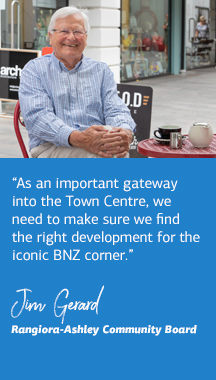 The draft Strategy was developed with the help of specialist urban design and transport consultants, and guided by a Reference Group that includes community groups, businesses, developers, Enterprise North Canterbury, the Rangiora-Ashley Community Board and Council members. Through three ‘Inquiry by Design’ workshops, this group shaped and refined the concepts presented in this document.

A survey relating to the future of Rangiora was also opened to the public and the responses were used as a ‘sound check’ to make sure we were on the right track.

The draft Strategy was released for a formal public consultation over February and March 2020. We received 42 formal submissions along with hundreds of other ideas and pieces of feedback and we thank everyone who got involved. Due to the COVID-19 pandemic, an online hearing was held on 20 April 2020 during which 4 submitters presented to the hearing panel via Zoom. The hearing was live streamed and can be viewed here. Minutes of the hearing can be viewed here.

Following deliberations and recommendations by the Hearing Panel, the final Rangiora Town Centre Strategy – Blueprint to 2030+ was developed and officially adopted by the Waimakariri District Council on 7 July 2020.

This work builds upon the now superseded Rangiora Town Centre Strategy (RTC2020) adopted by the Council in 2010, which proved successful in bringing about exciting developments and greater vitality in the Town Centre. Archived updates and information about RTC2020 are available here.